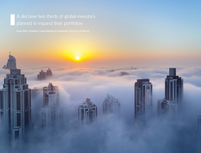 Market momentum to continue, with 83% expecting a further rise in investment volumes in 2015.

Jobs growth in metro markets fueling demand. After a weak, weather-impacted start to 2014, US economic growth accelerated in the second and third quarters. For the whole year, real GDP growth is forecast at 2.1%, to accelerate further to nearly 3% in 2015. It is estimated that this could translate into a gain of 2.5 million jobs in 2014 in 2015, increasing to 2.7 million in 2015, which would be the highest annual total since 2000.

As significant as the improvement in the aggregate economic statistics is the greater number of markets within the US driving growth. Whereas earlier in the recovery the intellectual capital, energy and education (ICEE) markets were the main drivers, growth has expanded to and accelerated in more US metropolitan areas in 2014, including some of the hard-hit housing markets such as Phoenix, Las Vegas and many metropolitan areas in Florida, fueling greater demand for real estate. As an example, half of the US metropolitan areas tracked by Colliers International has recovered all of the office-using jobs lost during the recession, and nearly 90% added office-using jobs on a year-over-year basis in June 2014.

In addition to stronger demand, low supply-side pressure in most markets and property types is contributing to tightening in the US real estate markets. Lender caution, high construction costs (which continued to increase through the recession) and still-elevated vacancy rates in many markets and property types are restraining development. The construction activity that is occurring, especially speculative, is generally targeted, concentrated in the strongest markets and submarkets where tenant demand remains robust, such as Houston, San Francisco, Silicon Valley, Boston and New York. This measured approach to development, coupled with positive demand trends should result in further occupancy gains.

These trends bode well for the investment market, as US survey respondents identified property fundamentals and economic growth as the two most important factors influencing investment decisions.